We’ve been talking about hate, pain, and anger, and I’m going to continue with that today. Many of you have sent 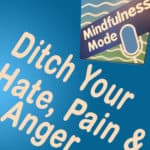 me emails saying you want more insight into that, especially anger and hate. So here we go. I always love getting emails from you. Tell me what you think of this episode. Email your thoughts to me at bruce@mindfulnessmode.com.

Yesterday, I was listening to an interview where a scientist was catching fish, tagging them, and throwing them back in the water for research purposes. He’d been doing this for months, and he and his family and community members were all helping and they had caught hundreds of fish. They were aiming for 10,000.

I started to think how confused those fish would be, if they could actually think about what was happening to them and their friends and family. They would likely start thinking something was very messed up in their world. They’d probably be thinking they’re in the wrong place, they don’t belong there.

Do you ever feel like you’re messed up and you’re not able to figure out the world you live in? If yes, then you’re not alone. My clients tell me this a lot. They say, they feel like they’re on another planet and that all the beings living there are aliens that they just don’t understand.

I once coached a gym teacher, and helped him with some of his demons. I spent 5 sessions working with him, let’s called him, Dave. He had an overflow of anger and he’d get angry with his students and then later regret it. There had been parent complaints and 2 meetings with his principal. Dave’s first hypnosis session revealed 2 incidents that had happened before he was 5 years old. He hadn’t remembered either one in his conscious mind, but during hypnosis, they came out with vivid detail.

Later we were able to work on forgiveness. There was one person in his life that had caused him more pain than any other, and we worked through that. We talked about forgiveness, and how forgiveness would be for him, not for the other person. We moved through a whole process of forgiveness, including forgiveness of self. He discovered he had a deep level of shame that he’d never before identified.

Like I said, it took 5 sessions, and he was able to look at life differently and feel a whole new level of calmness. He told me, he said, “Bruce, I can’t believe how much focus I have, and how much drive”.

Dave was a man of few words, but at the end of the 5 sessions, he told me that he couldn’t believe how different he felt, and how much peace he was feeling as a result of our hypnosis sessions.

Tune in to the episode to learn how to take action to deal with hate, pain, and anger.