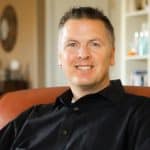 Scott Wilhite is an award-winning commercial filmmaker turned social entrepreneur. As a writer, producer, and director, he was enjoying a promising creative career without actually enjoying it. During ten of his most productive years, he found them to also be ten of his darkest, most unsatisfying years. He felt directionless and that his life was missing purpose and meaning. This all changed when a friend introduced him to the world of positive psychology and showed him the difference that comes from deliberately, consciously choosing what he mentally focuses on. With his personal transformation, he wanted to make the education easily accessible to others.

I think bullying mostly happens in the schools. Our young people experience this more than we'd like them to. Absolutely, mindfulness can help them; they sure need this.

This last summer, my wife and I were fortunate to be able to judge the Miss Duchesne County Beauty Pageant. Each of the young girls had to have their own platform, something they cared about where they could make a difference in the world.  Almost all of the girls, [there were only three who didn't] talked about suicide prevention, self mutilation or things having to do with depression. I thought, if only our young people were equipped with the knowledge of mindfulness and understood that choosing how they focused, how they see the world, choosing what their mindset is, will make the hugest difference in their lives.

They wanted to help in so many ways.

Meditation is part of Scott's routine. He says, “I have a set time when I get up each day and the first thing that I do is I will pray and meditate for about fifteen to twenty minutes. Then I will read some inspired words for about forty minutes. Then I will read industry journals and articles. Taking the time each day to be centered. I like to be intentional rather than reactive.” He says most people check their phone within fifteen minutes of waking up in the morning. As a result, they are reactive rather than intentional.

Scott believes in the high value of journaling. “When you write something down, you are there, you are present and in the moment.” Scott emphasizes the effectiveness of journaling to help you achieve what you want in your life.
Scott likes to give a chocolate bar as a gift to an unsuspecting recipient. Then he comes home and writes about the experience and how he felt as the giver. Scott says it's fun spreading the goodness and then writing about it.

Scott says he's a recovering ‘grumpaholic'. He is constantly checking himself to make sure he does not ‘expect' bad things to happen. Thinking positively is not living a fantasy life, Scott says. It's about being more awake and aware and alive. You choose what to focus on in life.