How To Release Your Inner Bully Dialogue is my topic today. How many of 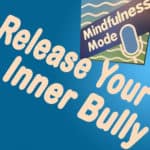 us have a bully on our shoulder? Someone who is always telling us how we should be doing things and what we could do better. You know, the one that says you are not good enough or smart enough for something. The one that criticizes your topic and believe it is more every move and makes you feel like an idiot when you don't live up to their expectations. The negative self-talk reminds you of all your faults and flaws, even when they are scarcely true. It can seem impossible to stop listening to these voices in our head! But it's possible with some practice – if only we knew where to start.

What holds a lot of us back from achieving our goals is often ourselves. We can be held hostage by our own thoughts.
If you’ve listened to Mindfulness Mode before, you know that I’ve worked in the field of Bullying Prevention for 18 years. Back in 2003, when I first started, I focused on the bully, the victim and the bystander. Later it became obvious to me that the biggest bully is often the one who lives within our own mind.
Very often that inner bully leads us to believe we are not enough, or that there is something wrong with us. This is that critical voice that seems so eager to be judgmental of others and then of ourselves.
A lot of times, that’s how bullying starts. We are critical of other people. We’re judgmental of how other people do things, how they look, how they act, what they say, and then sometimes bully them, maybe even unintentionally.
This criticism of other people happens because we are self-critical. We don’t think we deserve to win, we feel like there’s something wrong with us, so we take it out on other people.
Have you ever come across someone who is constantly critical of other people and they frequently exclude people from their lives because they think they’re not good enough, or there’s something wrong with them.
These are the exact same people that usually have a low opinion of themselves, even if that doesn’t appear to be the case.
Doing over 1800 live anti-bullying talks and presentations taught me that it’s easy to see the bully in other people, but way harder to see it in ourselves and then to do something about it.
Here’s how you can Release Your Inner Bully Dialogue.

The first step is to notice those inner bullying voices. I once had a temp job where I did quality control for a credit card company. A woman who worked alongside me was constantly critical of me in a passive aggressive way. She would say things like “did you really have to wear that today?” and she wouldn't even look at the clothes I wore or she would accuse me of not coming back from break on time. It got so bad that people talked about her behind her back when they came into work in the morning. The worst thing for me was how passive aggressive she could be without ever actually saying anything to my face but everyone knew what she thought of me because of how much negativity would pour out of her mouth on a daily basis.

The way this fellow employee carried on, reminds me of exactly how my inner bully behaves. There are sneaky, negative messages just under the surface that I may or may not notice. Thinking back to my temp job helps me to realize that my inner bully is real. I’ve named him Jasper. Giving him a name and an identity helps me stay aware that he’s constantly lurking in the back seat. Every once in a while I tell Jasper off, and tell him to stay in the back seat, mind his own business, and that I am doing to the driving.

This works for me. It keeps Jasper where he belongs.

I’m an action taker and I’ve always found that taking action as soon as possible gives me the momentum to make things happen that are positive. Sometimes I don’t take the time to focus on what I want to achieve before I take action, so I have to remind myself to create an outline that tells me where I’m going. You might say I’m setting goals, you might say I’m setting a destination. We’re constantly hearing speakers and trainers talk about setting goals and sometimes you might think it get’s a little tiring. Well, the reason it’s such a popular topic is because there are so many of us, me included, during lots of times in my life, where I was aimlessly plunging forward, but I was veering in all directions because I didn’t have clarity about my destination.

Two years ago I had a coaching client who told me she had never been one to set goals. She said she always thought goals were for people who weren’t action takers, and she said for her, goals were just a waste of time. But then she told me she got an assignment in her graduate program that required her to set a goal and put it into writing. She kept procrastinating on the project until the night before it was due. So after hours of thinking up different ideas, she finally came up with something that was really meaningful for her and she thought her prof would like it. She went on to tell me that this was one of her biggest wins during her university years. She somehow glued her goals just inside her purse so that everytime she opened her purse, she’d be reminded of what she wanted to achieve.

By the end of her degree she had achieved every one of those goals, and she said it taught her the value of setting goals and sticking to them. After that, she used the system on a regular basis and got used to the feeling of setting goals and making them reality. She told me that hiring a mindfulness coach was actually one of her goals, and that she had listened to dozens and dozens of my episodes before deciding I was the right person to be her coach. Anyway, choosing a direction in life is critical, and making sure it’s front and foremost in your mind on a daily basis is also a must.

Like I said, for me, taking action is critical and I think the sooner you do it, the better it is. That is, as long as you’ve set goals, like I mentioned already. Taking action means being willing to do the tough stuff first. Brian Tracy wrote a well-known book called, Eat That Frog. It’s all about beating procrastination. The whole point of the book is to do the toughest stuff first.

What is the thing you really want to put at the end of your list, what do you want to do list? Consciously make the decision to do that item first. Eat That Frog. Jump in, tackle the tough stuff, confront the most undesirable activities first, and then you’ll start to feel like you have some momentum. This really works. It’s not easy and nobody ever said it was. It’s challenging to dig in and do the nastiest jobs first. But once you get into the habit of doing this, then it feels like you can sail through everything else. Those other tasks can seem like a pleasure, like a joy because you know you’ve already accomplished the most miserable jobs.

I’m thinking back before the Pandemic. I was at the gym, going through my normal routine when I noticed a man across from me. He had curly hair and intensely focused eyes. His muscles were huge and he was lifting a lot of weight. I remember noticing how confident he looked and how easy it seemed to be for him to lift all that weight. I remember thinking how motivated he must be to be lifting that kind of weight and to have built the muscles he had.

One day we started talking and he told me he’d been in an accident and the physiotherapist got him working out and eventually suggested he get a gym membership and a trainer. He told me that once he started with a trainer, his life fell into place and he started feeling good about himself and started to achieve some of his goals. He said he was constantly plagued with negative self-talk – he called it ‘bad attitude’ and lack of confidence’. When I used the term ‘Inner Bully’ he lit up and said, Yeah, that’s exactly what it is. He told me that he runs on a regular basis now and that helps him stay positive.

I believe that whatever your routine is to keep moving, it’s important to make it a habit and stick with it. In January of 2020 I started walking every day, at first for 45 minutes and then I upped it to an hour. Since December I’ve been running for an hour every day. It’s incredible how it clears my mind, helps me stay focused and gets me set for the day. It definitely helps me shake my inner bully.

If you LISTEN/ SET GOALS / and TAKE ACTION, you’ll look over on your shoulder, and instead of seeing a bully on your shoulder, you’ll see a Coach. Your own personal, positive, upbeat coach, cheering you on, giving you a boost, and helping you feel confident day after day. Don’t get me wrong, it doesn’t just happen. It’s up to you to make it happen. And you’re well on your way.
I think that because you’re listening to this podcast, and you listened to the whole episode. Something inside you is telling you that YOU CAN DO IT. You can use mindfulness as a tool to accomplish your goals, live life with purpose, find your confidence, and become the person who’s grounded, feels content, and enjoys a feeling of happiness on a regular basis. So put that coach on your shoulder, give him or her a name if you like, and enjoy having a positive mentor right there with you, cheering you on.

So remember – stay in the mode – Mindfulness Mode.