Habit, determination, and confidence is my topic and today I'm having a conversation with a guy who has nailed 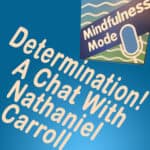 all three of these attributes. Nathaniel Carroll spending his life in gratitude mode. He started his ‘thanking law enforcement challenge' back in January of 2019 and since then Nathaniel, a resident of Wisconsin, has thanked over 1500 officers for their contributions as first responders. He has met many officers in person and has contacted a lot of others by writing letters. Nathaniel is hoping to reach officers in every one of the over 3,000 counties in the United States. Nate is passionate about supporting the charity called, Tunnel2Towers Foundation, a non-profit organization that pays off the mortgages of injured first responders. In addition to his mission of thanking officers across the country, Nate has set a record by doing 1.5 million push ups in the last year.

Nate is passionate about supporting the charity called, Tunnel2Towers Foundation, a non-profit organization that pays off the mortgages of injured first responders. Please feel free to donate.

Nate: Mindfulness means really being in touch with the moment and being in touch with your body, both physically and mentally. It means taking that daily assessment of where things are and where we want to go. For me, that ability  to focus really made that challenge a success. Ultimately, for anybody, mindfulness is incorporated to whatever success they have for themselves.

1.5 Million Pushups – How Did You Make It a Reality?

Bruce: How did you make it a reality to personally perform 1.5 million pushups in a year?
Nate: For me, it was being mindful. What that really means to me is focusing solely on what I can control and disregarding things that are outside of my ability to control. When you just focus on daily habits and routines, and you add them up moment after moment, day after day, may it adds up to something special. Being mindful and being focused on the moment and what I can control is really about all I can do to strive towards a goal like that.

Bruce: Tell us about your daily routine while working towards your pushup goal.
Nate: During the challenge, I slept in five days over 365 days, and that was sleeping in until a little after 7:00 a.m. Typically my day started at 3:45 a.m.. I got up, I would stretch, take an assessment of how I was feeling both physically and mentally and then by 4:00 a.m. I would start my pushups. I would do 60 sets before the day started. That is, before work started or before I had to get the kids off to school. I did 30 to 35 pushups per set. That would give me about 2,000 pushups. Then I knew I'd be able to get the other 2,000 pushups in before the end of the day. It was about creating habits and having a goal.

Bruce: Explain your passion for First Responders.
Nate: I think it's the awareness. You talk about mindfulness, not only of ourselves, but our awareness of what happens around us. To make it clear, during COVID, we really recognized the importance of truck drivers, store clerks, and all these people that contributed to our life in ways that, maybe prior to COVID, we hadn't put a lot of thought into. It's the same thing with First Responders. At any moment, these men and women are willing to trade their safety for my life. They're willing to answer the call and run towards danger when most of us are running away from danger.