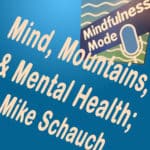 Mind, Mountains, and Mental Health is the theme of today's show and I have a guest with me who is passionate about the mountains and dedicated to helping others and has love of the sun. He's a speaker, author, explorer, and mountain climber and he has an intense passion for life. He also has the greatest laugh of anybody I know. He recently spoke at the Vancouver International Mountain Film Festival where he held the audience in the palm of his hands, according to one of the reviews. His talk was directly connected to the eighth person I had on the show way back in 2015; Brent Seal.

Brent was a mental health educator and a close friend of today's guest. I'm excited to tell you that today's guest is Mike Schauch.

Bruce: Let's start by talking about how you and Brent Seal are connected through this podcast, Mindfulness Mode.

Brent Seal was one of my first guests on the show back in 2015; a mental health educator, an athlete and a mountain climber.

Mike Schauch: My story with Brent goes back about 15 years, actually. And he told me along the way, about his interview with you that he did. That was in the earlier stages of him getting into public speaking. He told me what a good time he had and said, Hey, you should contact Bruce, and you should be on this podcast. I thought, Oh, this is a perfect fit.

Mike Schauch: Brent, and I go back to when he was in university, and I was doing a leadership workshop at the university where he was a student. I was speaking in the auditorium to about 100 people and I remember during the first break, Brent came up to me, and he said, Mike, How do you become a public speaker? And I said, Well, you go out to the public, and you speak. (laughter)

Mike Schauch: Brent said, I've got this challenge. I've been diagnosed with schizophrenia. I just said, so? I think that was the spark that fused our friendship. It began a connection that would go on for the next 15 years.

Mike Schauch: We have climbed many mountains together. I watched Brent overcome many mental barriers over the years and also become a very accomplished mountaineer and speaker. He spoke to larger audiences I ever spoke to in the subsequent years and  became an inspiration.

He became an inspiration, not only for the mental wellness community, but for others as well. It was a beautiful thing to see. Unfortunately, last September, Brent died on Mount Manaslu in the Himalaya, just below the summit at around 8000 meters. That news hit the community and his family very hard.

Mike Schauch: This event that you mentioned in the introduction, that was meant to be an honor. It honored Brent and what he stood for, and in a way to just continue this legacy that he started about inspiring people to tap into their mental wellness and into that language of the heart, to not limit themselves.

Mike Schauch: The message was to continue to take those steps. They don't have to be major leaps forward, but steps forward. And that was part of Brent's brilliance.

Bruce: Tell us more about your speech at the Vancouver Mountain Film Festival.

Mike Schauch: One of the things I talked about up there was this concept of the Bardo. The Bardo is a Tibetan term. It translates as place of transition, or a transitionary state between between death and rebirth, between who we were and who we become.

We know that the Tibetans believe in reincarnation from lifetime to lifetime. But what they also believe is that we can experience many incarnations in one lifetime and the Bardo is the place.

Do I want to let go? What part of me that no longer serves me that I can just let it be? And what part of me do I want to carry forward into who I become? And so this was something deeply linked to Brent because I saw Brent go through challenge after challenge after relapse after challenge and use his illness, not as a as a crutch, or some sort of a life sentence, but as a springboard from which he could create new life.

Brent was inspired by this idea of climbing the mountain and your mental wellness mountain. As a speaker, you could see him evolve over the years.

Brent would mention about embracing the suffering, embracing the struggle, and he explained, when when we do that, it actually gives us fuel to better deal with the future struggles and sufferings that we might encounter down the road. He would say that so often we attempt to suppress the suffering, the anger, the pain, and that's the exact opposite of what we need to do.

Tell Us A Brent Story

Over the years, we climbed all these big mountains and focused on our Mind, Mountains, and Mental Health. One of the most memorable days we ever had was not on some big mountain or a big epic day.

I was on my skis and Brent was in snowshoes. I would ski down a little bit, and then I'd wait for Brent to catch up on his snow shoes.

Then I'd ski down a little bit more and he'd catch up on the snowshoes. I thought there's got to be a better way to do this. In all the years Brent and I had been climbing together, not once had he ever brought a crazy carpet along, except for that day.

I said okay, we have this crazy carpet, do we have a little bit of short rope. For some reason Brent had packed a little bit of rope. I said, let's tie ourselves together by the waist and I just pointed my skis down and we got going and we started picking up speed.

I remember coming down these switchbacks and then coming up the bank. Brent would come down right behind me on the crazy carpet. He'd slide right up the bank almost flying right into the woods and the rope would catch him at the last second and whip him down the next switchback.

We were laughing so hard, like children. People hiking up the mountain could hear us before they could see us. I was  laughing my head off. They were likely thinking, what is wrong with this guy. Right behind me was this grown man on a crazy carpet.

Bruce: (Laughing) That paints a picture of the title of this episode, Mind, Mountains, and Mental Health.

The Goal Of Your Speech

A Time of Meditation

Bruce: During the speech, you had a time of mediation, to reach a spirit of joy. Can you tell us about that?

Mike Schauch: That's really the crux of the whole thing. It was about connecting again, back to who we innately are. Back to that story about laughing with Brent, when we were coming down we were just experiencing that total moment of joy. I mean, that's really what life is about, you know, so we can open ourselves to those moments. It reinvigorates us from the deepest level we can imagine and allows us to connect again with that language of the heart that I think is very much needed today. That takes us back to the mind, mountains, and mental health.

What brings joy to your life?

The two things that sprang to mind are those two little girls in the mountains, Karma and Pemba.  They bring true joy to my life.

Humor In Your Life

Laughing and humor is just as natural as that. It's not all the time. If you think about what got us here; there's a Tibetan saying, I heard some time ago: ‘if you could stack the bones of our ancestors, they would be higher than Mount Everest.'

Soyou think about how many people live their lives in a way that allowed us to be here and even you and me having this conversation right now and just the opportunities that we have in front of us?I

It took 1000s, even 10s of 1000s of lives and over many, many years, right? And think about what they struggled with and what actions they took and the courage that they had and all of that. So, if you think about it that way, How can we not be joyful? By being here? Focusing on your Mind, Mountains, and Mental Health.

A Gift From Mike

Because you listened to the Mind, Mountains, and Mental Health episode, Mike is giving away two copies of his book: A Story of Karma: Finding Love and Truth in the Lost Valley of the Himalaya by Michael Schauch

Just send me an email: “Bruce@mindfulnessmode.com and put “karma” in the subject line, and we'll get that book out to you. Just reach out and the book is yours for two lucky listeners.

A Poem Written By Mike

It is the beginning and the end of all things.

Like the pool of water returned to its natural state,

or the tiny droplet taking rests on a delicate leaf.

It is the eye of the deer.

A dark and endless orb as deep as the universe

filled with a billion stars

is the Great Owl extending from branch and trunk

seeing from behind its yellow eyes.

Hearing what cannot be heard.

rays of morning light dipping through the tree tops.

It speaks the language of the Earth,

a language that has been shaped and carved

and created over 100 million years.

It is the language of the heart.

It is where our souls come alive.

It is what we call home.

And so as long as I draw a breath,

I will do my best to move toward that stillness,

to be that stillness.

For that is where I find myself.

That is where we find each other again.

Just a reminder of the free book offer, listen to Mind, Mountains, and Mental Health episode. The book is by Mike Schauch. It's called a story of karma, finding love and truth in the Lost Valley of the Himalaya. And I can tell you this book was a pleasure to read it was a heartwarming adventure. The first two listeners to email me will win a free hard copy of the book. Send the email right now, send it to me bruce@mindfulnessmode.com with karma in the subject line. Thanks for listening, mindful tribe. take what we've learned today to reach new heights of calm focus and happiness.

Feeling stuck? Feeling frustrated? Let's talk about the possibilities. Let's talk on a free zoom call. Send me an email and put in the in the subject line “coaching session”. My email is bruce@mindfulnessmode.com and I would love to connect with you. So I look forward to that.