Today I’m talking about moving to a new place. The episode is about your inner bully and how you can transition your 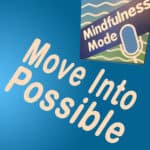 life to be more, to accomplish more, to do everything you believe is possible. That’s why I entitled the episode, Move Into Possible. Becoming more mindful will help you when you learn what it means to deal with your Inner Bully. I remember when I started the podcast back in 2015, a lot of people would give me a blank stare when I said my podcast was going to be about Mindfulness and Bullying and how a lot of us Bully Ourselves, causing incredible hardships, pushing us into doing terrible things we’d never normally do, forcing us to listen to terrible, negative and mean stories about ourselves.

That Inner Bully is always at work. But most people didn’t realize that Mindfulness and Bullying are closely related. The themes of my shows tell a story about so many of my coaching clients that have come to me. I could tell you story after story about so many of my awesome Mindful Tribe listeners who have reached out for coaching from me. The thing is, the stories are similar in many ways.

The common denominators are anxiety, stress, frustration, money’s not flowing, relationships are breaking, businesses aren’t clicking. And I get it. I’ve been there.

I had so much anxiety when I was an adolescent, I could barely operate in the world. I was ashamed and embarrassed. I was afraid to speak, my voice was a high, squeaky, remnant of what it was supposed to be. I felt defeated and didn’t have any idea what to do about it.

My inner bully was thriving at the time. It told me, “no one wants to hear from you”. “Just keep your mouth shut, and don’t do anything to attract attention to yourself”.

Even though my inner bully was robust and healthy, there was a little voice inside me that wouldn’t give up.

That other voice inside me was the Real Me. I didn’t know it at the time, but the Real Me was like a flickering candle that wouldn’t go out. Sometimes the flicker was almost invisible, hidden behind something, or fading to almost nothing, but it was there. Real Me was my friend and I was grateful for him. After while, I started to know Real Me as Reme (or Remy). I shortened him to the first 2 letters of each word and I started to get to know Reme even better.

A Flicker of Hope

Reme told me there was hope. He told me to push forward and, Take Action – push ahead. Don’t give up. He was a great friend. He was on my side. Every time I thought of Reme, I knew he was Real Me, the person I was meant to be.

I learned so much from Reme that I have shared over the years with all of you who asked me for help, all my coaching clients.

Now I’ll tell you right now, I never told most of you that I had named this guy, Reme. I think my Inner Bully had convinced me that Reme was a stupid name and I needed to keep that to myself.

It was never easy deciphering which voice was which. My Inner Bully was so cunning and tricky, he would pose as Reme and I’d sometimes get tricked.

But like I said, when Reme got me to take action, everything improved and I would feel better, I would feel successful, I’d accomplish things in my life.

Then as more and more people came to me, because they knew I was a Mindfulness Life Coach, I was able to help them with their Inner Bully.

I remember one client, I’ll call her Natalie, I mean confidentiality is huge in coaching so for a long time I never talked about my coaching clients at all, then I realized I needed to ask them if I could share their stories. Natalie said yes, but she preferred I didn’t use her real name.

She came to me because of a work situation, where she was frustrated with her boss. Her boss was bullying her, she didn’t realize it was bullying at the time, but her boss was making her life miserable, and she didn’t know what to do about.

As we worked through her emotions around her work situation, it turned out that not only was her boss bullying her, Natalie was her own worst bully.

She then began to realize that this applied to every area of her life, her relationships, her family, her work, even her down time.

So I called today’s episode, Move Into Possible. So many of my clients have felt disempowered for so long, they came to a point where they didn’t think any of their goals were possible to achieve.

In his case, we found out that when he was a young child, he father used to belittle him, and if he ever asked his dad for a few dollars, his dad would say, “I don’t have any money”, and he’d open his wallet and show his son that it was empty.

This began a “lack” mentality in Glenn. His Inner Bully kept reminding Glenn that money was scarce, that there would never be enough money. That money was limited.

There is a way YOU can Move Into Possible. You have to believe, and you have to take action. The other thing you have to do is something I talk about a lot. You have to understand how to “let go”.

Your way of letting go might be completely different from someone else. You can learn to let go as a result of journaling, especially after you spend quite a bit of time writing and putting to paper, all kinds of thoughts and ideas that are floating around in your brain.

That’s called, Doing The Work. For most of us, our natural tendency is to avoid the work. As soon as we feel that uncomfortable feeling coming through via our emotions, we decide to do something to cover up that painful feeling. That feeling might be fear, it might be anger, it might be pain. The feeling could be anxiety, stress, or worry.

How do we cover up those emotions? In our society, we find a bunch of ways. One is to avoid the feeling by doing some busy work. Doing something that you enjoy, but its really not going to get you anywhere. Can you think of any examples in your life?

My clients have told me lots of ways they do this. Video games, cleaning, Netflix, going to a bar, shopping, there are so many things people do to push down and suppress their emotions.

The way you Move Into Possible, is to notice those emotions as soon as they happen, and then act on them, rather than suppressing them. If you’re experiencing anxiety, you need to understand what that anxiety is about. What is the root cause? What is the underlying reason that anxiety is showing itself in your life.

Once you identify the emotion, then in order to Move Into Possible, you need to Take Action and do something that will actually move you to a better place. And I think I hear you saying, “how do I know what the better place looks like?”

Where Are You Going?

The answer is that you have to know where you’re going. The majority of humans don’t have a specific idea where they’re headed in life. They don’t have concrete goals or a specific idea of exactly what they want their life to look like. This is important.

To Move Into Possible, you need to know where you’re going. Otherwise, you will flounder in life, you’ll wonder why you’re moving in circles and not necessarily getting to where you’d like to be.

Some of the people I interview have always had a clear plan as to where they want to go in life. Others were kind of floating from place to place, and finally came to the realization they needed help, they couldn’t do it on their own.
There is a way to move forward and feel happy and content in your life.

Tune into the episode on your favorite podcast app to hear more strategies and the remainder of this episode to help you become more grounded, feel good about your life, and stop feeling stuck.