After coaching many clients, it is obvious that the most difficult challenge for most people is not developing certain 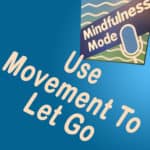 skills, or becoming more focused, it is the skill of letting go. Many of the people I work with come to realize that what's holding them back is an inner bully, or a mindset that is making it impossible for them to move forward. In many cases, this mindset served them

in a positive way at one point in the their life, but as time went by, that same mindset no longer serves them.

That inner bully originally protected them in a way that was critically important at the time. In other words, they may not have survived through their challenge back then if it hadn't been for this particular thought process.

Years later, it became obvious that this inner dialogue was no longer helping them to move forward in life. Once my client came to this realization, then the burning question became obvious. “Now that I know my problem, how do I move forward? How do I let go of that particular way of thinking?”

If you're a regular listener of Mindfulness Mode, you'll know that I refer to this negative thought pattern as your inner bully. But how do you let this thought pattern go?

Do Both Minds Agree?

If you're like me, you might have difficulty letting go of books that are accumulating on your shelves, clothes you haven't worn lately, or even tools that you no longer use. Letting go of thoughts that are holding you back can be difficult in a similar way.

Being In Prime Condition

This is where journaling and meditation becomes vital. They work together to help you move to the point where you can effectively ditch the way of thinking that is derailing your life. Many of my clients gain clarity in their conscious mind by doing daily journaling about the issue. Often they start by writing about whatever is on their mind. Sometimes I suggest starting off with the two words, “I am”.

Meditating after journaling can be particularly effective. I recommend developing a routine so that you are doing these two exercises on a daily basis. It is valuable to journal and meditate in the morning, soon after waking up.

If you want to move forward quickly, consider also journaling and meditating before falling asleep at night. Stay away from any digital devices at least two hours before bedtime and don't put food, alcohol, or drinks other than water into your system in the three hours before sleep. By doing this, your brain and body will be in prime condition for a restful sleep and your brain will work to solve your inner dilemma's during the night.

Now you've set up routines involving journaling and meditation, so it's time to add another crucial element. That element is movement. Why does movement help us solve challenges more quickly and cause us to feel more centered and grounded? The answer to this question has been unknown for centuries, but as a result of some recent students, some scientists have theories that are making a lot of sense.

The human brain is a muscle and thus it needs exercise. It also thinks through movement, which is why some of the best ideas come to us when we are moving around doing something else entirely.

So take an hour before sleep each night to do some yoga or other physical exercises. The late James Fuller Fixx (April 23, 1932 – July 20, 1984) was an American who wrote the 1977 best-selling book The Complete Book of Running. He is credited with helping start America's fitness revolution by popularizing the sport of running and demonstrating the health benefits of regular jogging.

Deepak Shukla is a marathon runner who has run in over 25 marathons and was also a 3X Ironman. He was my guest on episode 362, called, Discover Mindfulness In Ultramarathon Running. You can listen at MindfulnessMode.com/362.

He explained on the episode that movement, and specifically running, made him more aware of his emotions. He described it like this. He said movement helped him almost see what emotions were coming to him. He said he could sense the triggers and become mindful of what was happening and what his trigger points were. As a result, movement allowed him to manage his negative emotions and process them a lot more effectively than he could previously do. He said running made a huge difference for him.

Yoga can also help you process your thoughts and become more focused and have less anxiety. Back in October 2020, I interviewed a couple who have devoted their lives to Yoga and helping to spread the word that Yoga can be a powerful way to become unstuck and move forward in your life.

The couple is Juliana and Mark Spicoluk and they are known online under the name, Boho Beautiful. Boho Beautiful is a travel, yoga and lifestyle brand, creating positive content for the body, mind and earth. Their online content is centered around yoga, travel, fitness, vegan food, self-awareness, conscious living and guided meditations. Their episode is MindfulnessMode.com/MindfulnessInYoga.

Boho Beautiful has grown to over 1.5 million subscribers on YouTube, 300k+ followers on Instagram, sold tens of thousands of books & programs online, and inspired and been inspired by so many wonderful people from all over the planet.

Another Yoga expert I interviewed is Kelly DiNardo. She’s the author of several books, including Living the Sutras: A Guide to Yoga Wisdom Beyond The Mat. She’s written for The Oprah Magazine and Martha Stewart Living. She’s been teaching yoga for more than 15 years and is the owner of Past Tense yoga studio in Washington, DC. Kelly is also the co-host of the Living It podcast. Kelly is a firm believer that movement through Yoga is a way to feed your body and your mind so that you will become more able to let go of what no longer serves you.

During the interview, we discuss how Kelly started practicing yoga at a young age; the parallels between her childhood and how she lives today and how she views balance now as opposed to then. She talked about how Yoga has helped her through so relationship changes and relocating from one major city to another. Kelly has a clear understanding of how Yoga can help clients who are living with a mindset that is no longer serving them.

Kelly DiNardo's episode on Mindfulness Mode is called Yoga Wisdom Beyond The Mat; Kelly DiNardo. You can listen at www.MindfulnessMode.com/485.

Through studies in the last twenty years, Scientists have made it clear that movement can help us change mindsets that no longer serve us. There are studies that show that as we move our bodies, we will become more grounded and more certain of what we should be doing in our lives.

A specific way to use movement to let go of a limiting belief is to focus on the belief by condensing it into a concise statement and phrasing it in such a way that your mind will identify that limiting belief as something to release. Here’s an example. Let’s say I have anxiety because I’m worried about what others think of me. I would begin by stating something like “I have been given power and ability to let go of my belief that the opinions of others will hold me back.”

The mantra that I would repeat while exercising, running, swimming, or doing yoga or martial arts is, “I now let go and move forward knowing that the universe embraces what I have to offer.”

This takes time and practice, and will require intuition to determine exactly what mantra is right for you.

Simply moving while talking can unlock inner wisdom and will help you advance faster than you would have without pairing movement with talking.

This process can be quite intense both physically and mentally, so take regular breaks from your movement and pace yourself. I also recommend you write down notes in your journal following your sessions. Even doing this for 5-10 minutes a day can help you move through some of your challenges and you'll notice changes in your thought process.

If you find the movement to be too exhausting, gently hold specific positions for a few seconds and be sure to breathe deeply and comfortably. You don't want to become dizzy or lightheaded, but you do want to push your boundaries.

If you know the chakra system, visualize it during the process as well. This aligns and energizes every cell in your body. If you'd like to learn more about chakras I recommend reading this Book: The Big Book of Chakras and Chakra Healing by Dr. Susan Shumsky

Dr Shumsky is an expert at Chakras and how to use your knowledge of chakras to heal and move forward in life. I interviewed Dr. Shumsky on episode 514 during March, 2020. Her interview is called Chakra Healing For Transformation With Dr. Susan Shumsky.

There are scientific studies to show movement can improve mindset.

One of those studies was conducted by Gareth Hughes and Christopher Wilson in 2017. It is called, From transcendence to general maintenance: Exploring the creativity and wellbeing dynamic in higher education.

In their study, they state that “There is a growing body of evidence relating to the health benefits of participation with creative activity, and engagement with creative experiences. I found this study particularly interesting regarding movement and well-being.

Another study can be found under the title, Stretching Reduces Loneliness and Boosts Overall Wellbeing. This study shows that stretching helps to balance serotonin, which you may know from listening to the show is the happy chemical.

If you want to stretch the muscles in your face, forehead, neck, arms, upper back take a look at this short YouTube Video called Yoga for Your Face with Adriene Mishler .

Practicing Kundalini Yoga and using meditation is a powerful way to change your mindset. Be aware that it is advisable to consult your doctor and then an expert Yoga teacher or therapist to help you with this process of transitioning your mindset. As a result of the exercises, you could feel stiffness in your body or even headaches after doing practices.  This can happen any time we push our bodies in ways we haven't done before.

My message today is simply to be open to the idea that movement is an effective way to release your inner bully and to let go of any mindset that no longer serves you.

Thanks for listening, Mindful Tribe.