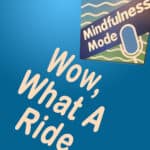 The episode is called Wow, What A Ride. Let me tell you what inspired me to share this topic with you today. My wife sent me a quote, “life should not be a journey to the grave with the intention of riding safely in a pretty and well preserved body, but rather to skid in broadside in a cloud ‘o smoke, thoroughly used up, totally worn out, and loudly proclaiming, wow, what a ride.” This quote is by Hunter S. Thompson. I thought what an interesting concept to think about. After all, mindfulness is often thinking about healthy eating and just being happy and healthy and living that kind of life. Do you sometimes think it's risky to be too careful? Maybe being too careful will cause us to miss out on life. This quote says hey, live your life, enjoy your life. I decided to look up Hunter S. Thompson and find out more about him.

Hunter Stockton Thompson founded a movement in journalism called the gonzo journalism movement. He rose to prominence with the publication of a book called ‘Hells Angels'. This is a book that he spent almost two years living and riding with the Hells Angels motorcycle gang in order to write this firsthand account of their lives and what it was like being a Hells Angel member. Thompson was born in 1937, in Kentucky and he died in 2005. My research said, in one of the articles; Hunter had a briefcase of drugs and a supreme command of language. And as he defined his legacy at Rolling Stone, he changed journalism in the process. So yes, Hunter became a journalist at Rolling Stone magazine, and really made an impact there as a journalist.

What do you think? What are your thoughts? Do you think it's really important to do what he suggests in this in this quote? “Life should not be a journey to the grave with the intention of arriving safely in a pretty and well preserved body, but rather to skid in broadside, in a cloud o' smoke, thoroughly used up, totally worn out, and loudly proclaiming, wow, what a ride!”

There are five ideas that came to me as a result of the above quote. The first one is, take chances. I think it's really important not to be too careful all the time; not be too worried about taking risks. Don't be so concerned that something negative might happen. I really think it's important in life to take chances, I mean, that's my philosophy. I have known people with the opposite philosophy. People who are extremely careful and never want to take chances. That's not my philosophy. I really like the idea of taking chances; the idea of doing things that maybe a lot of other people would not choose to do. I think taking chances makes life fun; makes it interesting. It gives life, an aspect of excitement. And it's just the way I want to live life.

The second thing, I believe, is use your creativity. And I think that a lot of people in adulthood, get kind of cornered in their career, where they really are not using very much creativity. I've interviewed a lot of people that got stuck in a job of some kind and they kind of woke up one day and thought, What am I doing? I'm not, grabbing life by the horns. I'm not really digging in and enjoying my life the way I should be. And then they turned around and discovered that through creativity, they could discover something about themselves. They could discover something about the world that just changed their perspective. And I can think of a number of guests on my show who fit this description. Tommy Breedlove is one of them. I absolutely loved having him on the show. It was episode 554. Tommy is one of those people that has that a huge creative side. And he introduced me to some other people that I've had on the show that were really creative as well. So whether it's getting into music, like my episode that I just just had with Jack Stafford if you'd missed that episode (725)m I'd encourage you to go back and check it out. You can check out jack Stafford at podsongs.com.

There are a lot of different ways to be creative. I believe using your creativity is a way to give yourself a breathtaking life like Hunter Thompson talked about.

Push yourself into the world. Do you make it a point to go out and speak to people and to connect with people? Like I was saying Tony Breedlove is a connector and has a vibrant life as as result of that philosophy. Do you want to just disappear into the background when there's a lot of people around? Even if you're an introvert, you may notice that sometimes you sort of push yourself and you get to meet people. That's how a lot of the most interesting things happened in my life. They happened because I took that extra initiative and pushed myself outside of my comfort zone.

Whether you're an introvert or an extrovert, it doesn't matter. It's important to push yourself into the world, make connections, talk to people, ask questions, tell stories, you know, be willing to push yourself that way. And that can lead to things that you'd never imagine like friendships, jobs, relationships, and more.

Today is my my aunt Peg's birthday. What an amazing, wonderful woman she was. She was so vibrant and upbeat and she had the most beautiful laugh. She would laugh this beautiful, heartfelt, hearty laugh and smile at you and, and there'd be a twinkle in her eye. She was a very beautiful soul. And so today, I've been thinking about her a lot, because she was somebody I really related to. I believe she pushed herself in the world to inspire others.

Listen To Your Emotions

Being grateful is a way to win in this world. If you're a person that has that kind of gusto, with a twinkle in your eye like my Aunt Peg, you'll be a winner. Do you have that hunger for excitement and an interest in meeting people and doing new things? I believe that being grateful is a big part of becoming that kind of person. It can help you to to embrace life, to live life with gusto and to feel, when you get to latter part of your life that you really have nailed life and embraced it. I'm not saying I agree with everything Hunter Thompson did, but he certainly lived life with gusto.