Compassion is the topic today. It's easy to be compassionate to those we love and who are kind and loving to us. 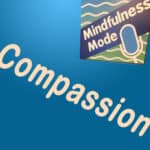 Being compassionate to every living thing is a whole different challenge. If you can truly show compassion to everyone and everything, you will experience a life that largely includes peace and contentment.

My aunt Vesta was a person in my life that seemed to show compassion to everyone. She absolutely loved children and was a teacher for many years. She lived near the gates of Western University, here in London, Ontario and she took in university students year after year and kept in touch with many of them who became authors, scientists, doctors and professors. She worked in First Nations communities and always loved talking about the people in her life.

When Aunt Vesta came to visit, one of the first things she would say is, ‘Tell me about you?’. I would ask her questions and hope that she would play the piano … she would always turn the conversation back on the person she was talking to. She had a lot to share, but she wanted to know what was happening in the lives of others.

Someone else who seemed to live a beautiful and selfless life, showing a huge amount of compassion to others, is Thich Nhat Hahn, author of over 130 books.

Thich Nhat Hahn has written many poems and offered much advice on how to show compassion to others. Here’s a quote by Thich Nhat Hahn: “To love, we need to open our heart and release our preconceived notions about other people. We cannot judge by appearances or assumptions of what they might do.”

Apostle Of Peace And Nonviolence

Dr. Martin Luther King, Jr. called him “an Apostle of peace and nonviolence” when nominating him for the Nobel Peace Prize. Exiled from his native Vietnam for almost four decades, Thich Nhat Hanh has been a pioneer bringing Buddhism and mindfulness to the West, and establishing an engaged Buddhist community for the 21st Century.

In 1982, Thich Nhat Hahn moved to a site in the south west of France, that became known as “Plum Village.”

Under Thich Nhat Hanh’s spiritual leadership, Plum Village grew from a small rural farmstead to what is now a large and active Buddhist monastery, with over 200 resident monastics and over 10,000 visitors every year, who come from around the world to learn “the art of mindful living.”

In the last twenty years over 100,000 people have made a commitment to follow Thich Nhat Hanh’s modernized code of universal global ethics in their daily life, known as “The Five Mindfulness Trainings.”

Thich Nhat Hanh also founded the “Wake Up” website, a worldwide movement of thousands of young people training in the practices of mindful living, and through this program, thousands of teachers have been taught to teach mindfulness in schools in Europe, America, and Asia.

In 2014, just after his 88th birthday, Thich Nhat Hanh suffered a severe stroke. Four years later, in November 2018, he returned to Vietnam to live out his remaining days. Nhất Hạnh has published over 130 books, including more than 100 in English, which have sold over 5 million copies worldwide.

Thich Nhat Hanh is often referenced by guests on Mindfulness Mode and his wisdom is cherished by most of the people I know who practice mindfulness.

Nhat Hanh refers to “Deep Listening”, which is the kind of listening that can help relieve the suffering of another person. It’s often called compassionate listening. You listen with only one purpose: to help him or her to empty his heart. … You just listen with compassion and help him to suffer less.

I’m going to share these words by Thich Nhat Hahn on compassion:

In the eyes of Great Compassion, there is no separation between subject and object, no separate self. If a cruel and violent person disembowels you, you can smile and look at him with love. It is his upbringing, his situation, and his ignorance that cause him to act so mindlessly. Look at him—the one who is bent on your destruction and heaps injustice upon you—with the eyes of love and compassion. Let compassion pour from your eyes, and don’t let a ripple of blame or anger rise up in your heart. He commits senseless crimes against you and makes you suffer because he cannot see the way to peace, joy, or understanding.

If someday you receive news that I have died because of someone’s cruel actions, know that I died with my heart at peace. Know that in my last moments I did not succumb to anger. We must never hate another being. If you can give rise to this awareness, you will be able to smile. Remembering me, you will continue on your path. You will have a refuge that no one can take from you. No one will be able to disturb your faith, because that faith does not rely on anything in the phenomenal world. Faith and love are one and can only emerge when you penetrate deeply the empty nature of the phenomenal world, when you can see that you are in everything and everything is In you.

Long ago I read a story about a monk who felt no anger toward the cruel king who had chopped off the monk’s ear and pierced his skin with a knife. When I read that, I thought the monk must be some kind of god. That was because I did not yet know the nature of Great Compassion. The monk had no anger to hold back. All he had was a heart of love. There is nothing to prevent us from being like that monk. Love teaches that we can all live like the Buddha.

I encourage you to read some material by Thich Nhat Hahn. He believed that we are all one. Understanding that we, as living beings are all one, can help us feel and show compassion for everything and everyone.

There are hundreds of thousands of essential workers out there helping people struck down with COVID19. I know some of them, because of my wife, Darlene, working in the ICU, and so many of her colleagues. They’re overburdened and yet pushing through, doing whatever they can and doing it with compassion.

Here in our part of the world, COVID19 is still central in the lives of many. I believe that striving to live every day by showing compassion is one of the things we’re called to do.