Linn Rivers is a trauma recovery coach and mentor who uses Neuro-linguistic programming, hypnosis, and mentorship. Using these tools, she is able to connect directly with the subconscious mind to make relatively quick and dependable shifts in the neurological system. Linn is able to relate closely with people on a wide range of traumatic events that she herself has overcome, such as the death of loved ones, abandonment, neglect, sexuality issues, growing up with an alcoholic parent, relationship dynamics, gender identity, anger/fear, addiction, illness, and near-death experiences. 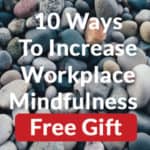 Do you want to improve the focus, drive, and productivity of your employees? If so, you can learn how by downloading, '10 Simple & Effective Ways to Increase Mindfulness in the Workplace Now', a free PDF at MindfulnessMode.com/workplacep.

Linn, I think you said you have an alcoholic parent?

And so tell me about that. How did you deal with that before you became a trauma recovery coach and how do you deal with it in your own life. How do you help other people who have addictions?

You know, I think addictions are an internal voice that seems something is off in your life. It's, it's not necessarily a neurological pattern per se. It's something that we, we tend to ignore. We have a voice that's telling us, Hey, something's not right, but we're so trained to ignore the little sirens that are going off and saying, Hey, like pay attention to me. And so we drown everything out. And that's a mindfulness practice to me is what is this voice trying to say, you know, and if I am pushing myself into these things to numb my existence and to ignore what's actually going on, it's not necessarily an addiction. It's a, it's a process to look at it as what am I missing and what do I really need to look at in my life.

Right. And as a trauma recovery coach, do you work with a lot of people who have addictions of various kinds?

I have, yes. I've, alcohol is typically the number one. I mean it's the number one drug in the world and I have worked through it with a lot of people and it's really hard for people to turn away from it. It's one of those steps substances where it does numb us. And so it's an easy go-to. And yeah, it's one of my biggest, biggest things to work with.

I completely agree. And that is why I feel we do not have enough role models in the mainstream media who are teaching kids what it means to actually live an authentic existence. You know, we, we push drugs and cigarettes and everything. It's still in the mainstream media, even though we've become awakened as a society, you know, we use that word so often and yet we just have all of these people who spotlights on them and they talk about everything that they're doing outside instead of really reeling in the fact that we need to tap into who we are and what we're here to do and how we do that. It's not through alcoholics, not through substance. And so yes, that does actually really get to me. And I don't even watch any of those people because of that reason.

Yeah, no, I, I don't watch television hardly at all. I haven't for a long time, but I do know that I've seen some clips and stuff and you know, I laugh at her jokes. I think she's very funny in a lot of ways. But I think during this pandemic right now, I think there's a lot of glorification of alcohol too. I noticed that a lot of people say, Oh, well I wouldn't be able to get through this without wine and all this. And then people laugh. And I think more than ever, alcohol is being glorified. I mean I think that with marijuana, people don't talk about it as much, even though it is a mainstream thing, it's not glorified in the same way that alcohol is, is it?

No, it's not. And I mean, that is a big thing. Especially I was just living in Boulder, Colorado before being here in California. So there's like the legalization of marijuana and, and it's still, it's one of the best ways for people to numb it. It numbs them. And so it is starting to become more mainstream. It's getting up there. It's, you know, it's more talked about because there are more places where it's legalized and so it's getting there, but no, alcohol is still the number one go-to. And yeah, it makes me sad that it's such a ‘go-to’ during this pandemic because my personal beliefs surrounding this and the intuitive guidance that I've gotten is this is on purpose. This is happening for a reason. And it's where we're really trying to get people into a place of going inwards and really discovering who they are so they can show up in this world in a much more positive manner and who they are. And all I see are videos of people drinking wine and having all of these beer games and, and it's just like they're not taking this time to really find who they are. It's just another game of how much can I numb myself? How much can I put this off until it's over? And it's just, it's really, it's sad.

Be prepared to have an unfolding. You know, it's the scary thing about not numbing is that you're all of the truth that's going to start coming up. You know, it's one of the first main things that people go through when they stop drinking is they realize that their friends are not actually friends, they're just drinking buddies. You know, there are people who they go out with to the bar, but when they're with those people and they're sober, they don't have a lot in common. And that's one of the first things that people go through is realizing like, wait a minute, I don't actually connect with these people unless I am drinking. And so there is this unfolding of your entire life and coming to your truth of who you are, who you genuinely connect with, what it is you want to connect on, and all of these different levels of that come up to the surface.

And a lot of people are not ready for that. They're terrified of finding out who they really are because then all of a sudden they have to reframe their entire life. The structure shifts and all of a sudden the relationships that they're in, they don't make any sense. The friendships, the job, everything starts coming to the surface to really be reviewed. And that is scary for a lot of people. You have to really be prepared to go through the transition. It's not just the numbing, it's everything in your life is going to be under review.

So for myself, I am not a, I don't have activities that I'm like, I have to do this, have to do this. Right now the climbing gyms are closed. I'm not doing anything other than really relaxing. I work out maybe five, 10 minutes a day, you know, it's not something where I feel like it's an addiction. To me, it's, Oh, I'm not feeling good today. I'm not going to climb. Like I try, I do my best as well to keep things contained and not become a substance to me. And so when I'm climbing, it becomes a, I love climbing because it, it's a, it's a form of meditation for me. When I'm on the wall, there's nothing more that I can think about other than climbing. And so it clears a space for me and I believe that we have to clear space and release all of our thought processes in order to come to forms of clarity. And so when I'm on the wall, it's usually during a time when I'm like, okay, I have too much on my head. I'm overthinking things. I need to get myself out of this space. And so I climb. It is a physical and mental workout for me. But yes, climbing too for people can become an addiction. It comes to numbing. So it's all dependent on how you are mindful in your life really about everything that you're doing. And is it becoming, is it balance or are you overstepping one way or the other?

And so for you, climbing is kind of a form of meditation. Do you have any other forms of meditation in your life?

Doing absolutely nothing. And that is one of the biggest things that I teach people is the, it goes along that thing that you said, the being busy, that's a numbing. And I prescribe people to literally do absolutely nothing to lay on the floor. That's my meditation. I lay on the floor in a silent dark room and I literally, I don't try to push my thoughts away. I acknowledged them, I witnessed them as they come by. And that for me is meditation. Meditation doesn't have to be you sitting up in posture and you, you know, listening to specific music. It's the act of literally doing and not forcing yourself into certain thoughts and not certain, you know, pushing yourself into certain actions. I think the more comfortable you can be, the more clear you're going to be able to reach.

I know that you do NLP. Tell us from your perspective as a trauma recovery coach, how you discovered it, and what it does to help people, including yourself.

So NLP is a technique that is just about asking questions. So it's the way you ask questions and the way that you can elicit responses. So a lot of people, when they're asking their friends questions, they do it in a sense where it either comes from the person asking where it's almost advice bursts if I ask you, Oh, okay, Bruce, you, you like reading books, tell me which ones are your favorites. Right? And so it puts you in this thought process of thinking about, okay, which ones are my favorite books? Versus if someone says, Oh, do you like reading XYZ and gives you specifics? It forces you to actually think in their context. And it puts it in a box, right? So it's not actually coming from you, it's coming from the context of what they want you to say. And so it's just transforming the question into a way where it accesses their brainwaves and actually gets into their subconscious and is able to dictate what they're actually really wanting to say versus what they feel they should say.

Listen to the episode for more from Linn Rivers, Trauma Recovery Coach.