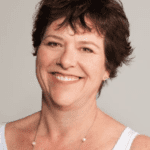 Beth Sutherland is a coach with extensive abilities including Neuro Linguistic Programing, better known as NLP, Quantum Healing, Healing Touch as well as incredible intuitive gifts. She helps her clients undergo major transformational changes through unique coaching experiences as well as healing sessions, workshops, and programs for the physical body. Some of her influencers include Bob Proctor, Louise Hay, Tony Robbins, Zig Zigler and Dr.Wayne Dyer

I’m going to say something that probably not very many people think of. I was the biggest bully in my life. I was mean to myself. I took what I thought other people were saying.

I had a right brain, left brain issue when I was a kid. It’s not really an issue it’s just my profile, but I am all dominant on the right and what happens is you process everything on the opposite side and what I was not told until I took Brain Gym was that when you’re under stress your non-dominant brain shuts down 75%. So my non-dominant was logic, so out the window all of my logic goes and I’m dealing with 25% logic and it really stopped me from doing things.

When I was going to school I was told I wasn’t trying hard enough and those kind of things. Everytime I was under stress it would make it worse because I couldn’t access that left brain. I also found out that I have music on my left brain and language and math on my right brain. So there is no logic in your right brain, ever.

So after I did twelve weeks of Brain Gym, it gave me whole brain thinking so I could access that math and logic. Unfortunately I didn’t do brain gym until I was thirty. It took me a long time to figure it out.

The reason I’m saying I was the biggest bully is that I took that information that I was lazy; nobody meant to hurt me in any way. But they thought I should be working harder, and they had no idea how much work I was doing under the skin and so I used to beat myself up saying that I wasn’t smart enough; I wasn’t good enough. They’re just pushing me along in school and I wasn’t allowed to take French because I couldn’t spell in English.

Depending on what it is you’re trying to let go of, if it’s a memory or something like that, that’s where I would go in and say, I’m going to change this memory, make it a little different so that you can work with it once it’s kind of broken apart from the original memory. It’s more of, what do I need to let go of so that I can release this thought process. If what you’re bringing up is someone being mean to you because you remember them being bad to you, then think, I need the opposite, I need the confidence. I start flooding the brain with the thought processes of confidence and examples of confidence. I would think, oh, I was really confident when I did this or did that. So you build up that feeling and the negative one can go.

Give yourself permission to start doing it and say, ‘I'm not wasting time by taking half an hour in my day to do this. I am actually gaining time.' People need to shift to get there, to realize they can't say, ‘I don't want to waste half an hour doing that'. It goes by very, very quickly and it absolutely adds tenfold to your life.