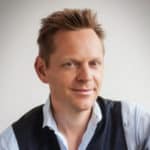 Calvin Correli is a software engineer, a creator, a meditator, a musician, an online entrepreneur and an all round mindful guy. He was born and raised in Denmark and currently lives in New York City.  Calvin has created a million dollar software company called Simplero which is an all-in-one solution for selling courses and knowledge online. Calvin once created a product called Computer Zen which helped people use computers while using a Zen mindset. Calvin is a meditator and feels that’s a great way to spend quality time with your inner child.

As a child, I was bullied quite a bit. I think people quickly figured out I was a pretty easy victim. Throughout the whole thing, mindfulness pretty much from anyone or anywhere, mindfulness in me and really seeing what was going on [would have made a difference]. It personally wasn't about me. Mindfulness in any of the teachers who were actually present to what was going on. Mindfulness in my parents. Anyone of those places would have made a big difference. What tended to happen was that, if they say something, people would be like, ‘oh we've gotta do something' and then there would be parental intervention that was just not helpful at all, it just makes it worse. Being with me and how I was feeling, them and how they were feeling, Any of those things would have made a huge difference.

There were some kids in the class just above me, for some reason they thought I was the funniest thing in the world to go after. Anytime they saw me around school they would hit me. They would just be looking out for me [to hit me]. During wintertime, I would never make it outside when there was snow because the minute they saw me, there would just be snow all over.