Let’s talk about forgiveness. It can be a challenge to let go of the past, but it is one of the most important things 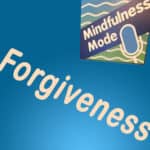 you can do for yourself and your peace of mind. Holding onto anger or resentment will only cause stress and sadness in your life. For some of us, there is anger seething just below the surface and you probably don’t realize the extent of the damage it is causing.

When you forgive someone who has hurt you, it helps to release that person from being a part of your story. Let go of what was done to you by forgiving them with compassion, understanding, and love instead. You deserve happiness too!

Many of my guests have talked on the show about how life changing the teachings of Eckhart Tolle have been in their lives. He wrote The Power Of Now, and that book is by far, the most recommended book on Mindfulness Mode.

This morning, I decided to listen to Eckhart Tolle during my run. I usually listen to a track that allows me to do 7th Path Self Hypnosis, but today I listened to the audio of The Power of Now. Do not equate what someone did to what they are as a person.

If you are struggling with anxiety or stress, it may be because you are hanging on to something that you need to let go of. A lot of people live for years hanging on to stories and beliefs that someone wronged them. If that’s you, it’s important for you to realize that these beliefs are holding you back, they’re harming you. These stories are preventing you from living your best life. You would have way more peace and contentment if you were able to let go of the stories that say you’ve been wronged somehow.

Forgiveness is a choice and for a long time I didn’t realize that. I didn’t’ understand that, in a second, I could decide to let go of the story that I played over and over in my mind, the story that I had somehow been wronged or mistreated.

Forgiveness is not an obligation. You are usually the one to receive the greatest benefit from forgiving someone or some thing. A lot of people think that forgiving serves the person that you are forgiving. That’s usually a misconception. It can be a benefit to the other person, but the benefit is usually for you, the one doing the forgiving, the one letting go of the story.

Sometimes it’s not a person we need to forgive, but a situation or an unfolding of events.

Guilt can live on and exist for your entire life. Even if you've never told anyone about the situation or incident that caused the guilt, that negative story can live on within you. Maybe years later you will realize that you can forgive yourself. It will not be necessary to talk to the person in your story who wronged you. It is possible for you to let go of the story of guilt in an instant. You can decide to have peace and move on.

Much of forgiveness is really forgiving yourself. That’s the most important kind of forgiveness there is. Often, buried deep down in our sub-conscious mind is a story we’re telling about ourselves, a story where we are holding ourselves responsible for some problems in our lives. Maybe we are blaming ourselves for not making enough money, not having enough friends, or not meeting up to our own standards in some way.

A lot of people never come to this place of realizing that the most important kind of forgiveness is self-forgiveness. Having an on-going mindfulness practice will take you closer and closer to self-forgiveness.

Learning to forgive can be an on-going process and it usually takes time and effort to make it happen. That’s why I talk about meditation, journaling, and walks in nature. All these activities will help you move to a place where you’ll be able to let go of some of these stories that are holding you back.

My mind has always been super active, and I didn’t know what to do with all the thoughts and messages that were constantly buzzing in my brain. One time when I was in my early twenties, I talked to a councillor and he said, you’re thinking too much. You’re overthinking things.

He asked me what I did when I would drive my car. He asked, did I listen to the radio or what? I said I usually didn’t listen to anything, I just drove in silence. He suggested I allow my brain to relax by sometimes listening to the radio, or listening to music so my brain wouldn’t be trying to solve things all the time.

Do You Think Too Much?

I remember thinking this was a bit strange, but Eckhart Tolle teaches the same thing. He says that we are addicted to thinking, and that too much thinking causes problems for a lot of people.

To forgive, you need to first listen to your inner bully. Some call it your self-talk or your inner dialogue. Notice those stories that are on repeat in your brain. What are they about? Who are the characters? Is there pain or anger involved? Become aware of those stories, and then make a conscious decision to let them go.

If you’re like me, there are probably lots of different stories, some more prominent than others. Once you notice one story that seems to be repeating a lot, make a decision to focus just on that story and how it would feel to let it go. To release the energy that is going in to telling that story over and over again.

Write about it, dissect it, if you want to talk about it to a trusted friend, that can be therapeutic too. Then make a conscious decision to let it go, to release the energy that goes along with it.

Decide that anytime that your inner bully starts to replay that story, you’ll just smile and say, been there, done that. That’s over. I’ve let it go. I’ve released that story from my Audio Collection.

When I did that, I noticed there were other stories that very quickly moved into place. It was kind of like on Netflix, once you watch a suggested movie, there are then a whole lot of other suggested movies that move into the cue.

But that’s ok. Learning to understand our operating system is a life-long project.

The bottom line is that as you begin to understand the benefits of forgiveness, you’ll realize that those benefits include more peace in your heart and mind, less stress on your body, increased happiness, and more self-confidence. You’ll experience other benefit too, but I’m sure those will be on the list.

Live In The Moment

As always, there’s one major way of living that will improve your life, that is to live in the moment. Enjoy the moment because that’s everything. The present moment is all we really have that matters. If you can lessen the number of judgmental thoughts you have, the more contented you’ll be. You’ll find you’re happier, more relaxed, and able to celebrate life to a higher degree.

If you haven’t read The Power of Now, or any of Eckhart Tolle’s writings, you might want to check them out. You can listen to the audio book, or read it, whatever works for you, but if you’re like thousands of Mindfulness enthusiasts, you’ll get a lot out of his lessons.