Nurture Your Soul With Creativity is the topic of today’s show. Think back to the happiest times of your life. Does 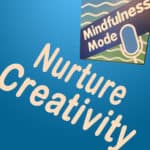 there seem to be any connection for you between your most creative times and your happiest times? For me, as a musician, I’ve had some of the happiest times of my life creating music, or teaching music to others and helping them learn to be creative.

I personally think that meditation can help you become more creative. I recently interviewed Tom Cronin – he’s passionate about reducing stress and chaos in people’s lives. We didn’t talk specifically about creativity, but I know Tom is high on the creative scale.

Tom Cronin is the founder of The Stillness Project, a global movement to inspire one billion people to sit in stillness, daily. Tom has written a number of books, including his recent publication, The Portal: How Meditation Can Save The World. Saving the world requires us as humans to be more creative than we’ve been in the past. I published Tom's episode a few days ago and you can hear it at www.mindfulnessmode.com/653. It’s called, “How Meditation Can Save The World”.

I’ve done some research on this topic of creativity and I’ve come up with five conclusions I’d like to talk about today. I’m curious to hear what you think about creativity. Send me an email at bruce@mindfulnessmode.com
Here are five ways creativity can improve our lives:

Creativity is a skill that can be learned. You don't need to be an artist or musician to be creative, you can use your creativity in everyday tasks like cooking, cleaning, gardening, or organizing.

Use Osborn's Creative Problem Solving Technique with brainstorming in between the steps as follows:

Complex problem solving requires some step-by-step action. You have to think about it and use your knowledge and experience to come up with solutions.

Your work experience can help you a lot and the knowledge you have gained in your education. From there, bring your emotion into play by allowing your mind to go to a story or incident that happened in your life where your emotions were triggered. Allow yourself to use empathy and imagination as you relax and let your mind go wherever it chooses.

A formula you might want to use would be: imagination + creativity + empathy + innovation = Problem Solving

Look around you. Think of the people you know. Do the more creative people seem to be more successful in your circles? Well, in my opinion, creative peioke tend to be more passionate about their work and I think that leads to more discoveries, more advancement, and more great relationships at work.

Creative ppl tend to ask the question ‘What if” frequently, allowing their mind to explore possibilities. From what I’ve read about Elon Musk, I think he used his ‘what if’ mentality to ask himself what would happen if he created a company that would make commercial space flight possible? His companies are built around what could happen if creativity was the key factor.

Creativity reminds me of a quote by Pablo Picasso. He’s known for saying, “Every child is an artist, the problem is staying an artist when you grow up”.

It’s important for adults to continue to massage their creativity so we don’t become too left brain dependent and forget about the thrill we get from life when we allow our creativity to play an active role.

Creative people have better relationships for several reasons. For one, they are often more motivated compared to less creative people. Creative people tend to be more relaxed and easy-going and that quality means they are drawn to people looking for a comfortable, relaxed, non-threatening relationship

Optimists tend to be creative. Being positive and up-beat is something that you'll frequently see in creative men and women. This up-beat nature, especially at it's most comfortable state, is another reason that you'll see these creatives with lots of friends and casual relationships.

Noticing emotions and being able to express those emotions is another quality common in creative people. People with this quality will be more sensitive to your feelings and needs than a person who is not considered to be creative.

Those specifically seeking out people to develop relationships with are often looking for some of the above traits.

The topic of creativity has come up a lot in my interviews on Mindfulness Mode, and just as an observation, I’ve noticed that health and creativity seem to be aligned.

There are studies about this topic and a study from 2012 researched veteran men. The researchers, Turiano, Spiro and Mroczek, followed 1,349 veterans for over 10 years . They looked at their intellect and creativity. They rated their creativity based on these five words: creative, imaginative, artistic, innovative, and uncreative.

The researchers identified creativity with the following phrase; “a facet of openness”. They concluded that creativity was related to a reduced risk of mortality. Specifically, each standard deviation increase in creativity was associated with a 12 percent decrease in mortality risk over the 18-year follow-up period.

The study’s authors concluded, “creativity predicted mortality risk above and beyond other details like age, education, smoking, and health status.” (p.666)

Turiano, one of the researchers, concluded that, creativity may reduce the risk of dying because it would enable the veterans to, “better confront the problems associated with increasing age and declining health and may have important effects on slowing cognitive aging.” (p. 666).

Turiano also suggested in his conclusion, “that promoting creativity throughout the life course, and especially at older ages, may delay the cognitive and physical health declines associated with normative aging.” (p. 669).

Turiano wanted to warn readers to be cautious in how you draw your conclusions from the study. He explained that the results only suggest that self-ratings on select adjectives predict mortality risk. That means that the people in the study rated themselves based on the creative words from the study.

I found the study interesting. Maybe you’ve read some books or read some studies on this topic. If you have, I’d love to hear from you. I realize that more studies would need to be done for the science to absolutely conclude that more creative people live longer.
Turiano, N. A., Spiro III, A., & Mroczek, D. K. (2012). Openness to experience and mortality in men:    Analysis of traits and facets. Journal of Aging and Health, 25, 654-672

5/ Creativity Will Boost Your Happiness Factor

As a kid, I would spend hours with my accordion strapped to my chest, playing songs, some of which I made up myself. When I thought the song was ready for a performance, I’d play it for my father, who was always eager to hear me play. He was crazy about the accordion. Although he was a man of few words, I could tell by the proud look on his face that he was impressed and amazed at the songs I made up.

He would smile, look over at my mom, and say, “Bruce has always been the creative one”.

The definition of creativity varies, but most experts agree it has to do with the ability to come up with new ideas, new connections between ideas, and novel solutions to problems, with or without hours of experimental accordion playing. Here’s the thing, forget the image of a moody Beethoven, sitting alone in an apartment in Vienna. Research suggests that creative people are actually happier than everyone else.

So you might be thinking, I’m not a musician, a dancer, a poet – no problem. Experts say creativity lives within all of us, it’s just a matter of allowing it to come forward.

In the book called, “The Creativity Cure”, author Dr. Carrie Barron says, “It really has to do with open-mindedness.” She says creativity applies to everything from making a meal to generating a business plan.

But whether creativity means coming up with your version of a delicious stuffed chicken breast, or a tasty crepe of some kind, or maybe singing operatic choruses for your friends, experts say there’s a strong connection between how much you exercise your creativity and your overall wellbeing.

In other words, creativity is good for you.

I interviewed the CEO of BrambleBerry.com. Her company offers soap making supplies and a lot more. Her name is Anne-Marie Faiola, and one of the things she said was, “Joy for me is creativity, because creativity is essential.” In our discussion on her episode, www.MindfulnessMode.com/243, Anne-Marie makes it clear how vital her creative side is in both her professional and personal life.

Another person who talks about creativity is Dr. Shelley Carson. She has researched creativity and she talks about using creativity to solve problems. Dr. Carson says that, “increases in positive mood broaden attention and allow us to see more possible solutions to creative problems.”

Dr. Carson wrote a book on creativity called, “Your Creative Brain: Seven Steps to Maximize Imagination, Productivity, and Innovation in Your Life”.

I want to share with you one of the most meaningful books related to creativity that I’ve read in a long time. The book is called, Squircle – that word came from combining the word Circle, which represents creativity or right brain thinking, and the word Square, which represents left brain thinking. The author of this book is Francis Cholle, and I interviewed him in February of this year. I highly recommend his book and the interview as well. It’s called, A New Way To Think For A New World, by Francis Cholle . It’s episode 639, so go to www.Mindfulness Mode.com/639.

Here are some things Francis recommends in his book to help develop your creative side. He says, change your routine in the morning, explore new foods for breakfast or other meals. Search for a new route to travel to work or school. Listen to different radio shows, podcasts, or audio books.

He also suggests you talk to other creative friends and ask them what they do to spark and express their creativity. In short, invite change and new ideas into your life.

One of the things I’ve concluded from what I’ve read and the people I’ve interviewed is that people who have creative personalities tend to have a lot of perseverance and they actually look for things in their life that will create interest and make their lives more fun. Individuals with these traits are more satisfied with their lives than less creative people.

It’s important to note that people are the most creative when they’re in a good mood, possibly because they don’t fixate on individual pieces of information and they are able to think more broadly and more positively.

Great post! I struggled with creativity for a very long time…the only thing that worked for me was an energy frequency treatment that a friend recommended to me. My results from that have been truly life-changing… I’ll leave the link to the site for anyone who wants to check it out for themselves:

They use sound-based energy frequency, it’s pretty interesting how it works.

You'll also receive our 'Calm Your Busy Mind' Infographic. It focuses on breathing, exercise, and mantras.
Your information will *never* be shared or sold to a 3rd party.
wpDiscuz
1
0
Would love your thoughts, please comment.x
()
x
| Reply