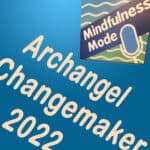 Last weekend I attended the Archangel Changemaker Event at Beanfield Centre in Toronto. It was a 2-day event put on by Giovanni Marsico. I’ve attended the annual Archangel Event since about 2016. The live event didn’t happen during COVID, so last weekend was the first in-person gathering since 2019. Today I’ll tell you a little about this awesome event. There was a long list of speakers so I’ll mention a few of them.

First, I was excited that Steve Sims was attending as a speaker. I interviewed Steve back in 2018. His episode was #360. He is a guy who has worked with Tony Robbins, Elon Musk, and Richard Branson and made incredible things happen for these and so many other people. He has planned events, arranged for people to meet, and generally led a fascinating life doing things that most of us wouldn’t even dream of.

I was able to talk to Steve and get a photo with him and I’ll tell you he was really personable and approachable. If you want to check out Steve, find him at www.SteveWSims.com and you can listen to his MM interview by going to www.mindfulnessmode.com/360

Stu McLaren was another speaker who had an interesting and memorable talk. He encourages people to start a membership site. He’s been helping people start membership sites since 2008 and he’s helped a huge list of ppl become successful by using this strategy. . He is a fellow Canadian, also from Ontario. He talked about several people who had created interesting membership sites including Art2Life Academy, The Twisterhood where they make balloon animals, and Tony’s Acoustic Challenge where Men Over 50 play the acoustic guitar together. Stu had a segment during his talk when he got people in the audience to participate in a sing-along of the song, Every Little Thing by Bob Marley. To sum it all up, he told us about his non-profit organization called ‘Village Impact’ where he builds schools in rural Kenya for underprivileged children. So Archangel Changemaker

Another speaker who had a powerful impact on me was Danielle Laporte. I’ve heard her speak before and again, she was incredible. Danielle started by talking about acceptance and how her definition of acceptance is ‘wonder and awe tinged with respect’. She talked about fear and how we all create our own fear and that we should not try to avoid it. We should practice loving kindness with our doubts and shame she said. We should all ‘choose loving thoughts’, and that ‘energy follows thought'. She said to think about this question: How do I want to feel?

Danielle has a new book coming out in October called, “How To Be Loving: As Your Heart Is Breaking Open and Our World Is Waking Up”. I encourage you to purchase the book, I know I’m looking forward to reading it. So Archangel Changemaker

Book: How To Be Loving: As Your Heart Is Breaking Open by Danielle Laporte

Jim Kwik was also speaking on the weekend, and I’ve heard him before as well. He started by talking about how we can all ‘Upgrade Our Brain’ just as he teaches in his book, ‘Upgrade Your Brain: Learn Anything Faster and Unlock Your Exceptional Life.’ Jim talked about the three M’s: Mindset, Motivation, and Method. Mindset represented possibility, motivation was about purpose and method was about the process. “If you fight for your limitation, you are going to achieve them.” He also talked about an effective formula for life which is PXEXS3. That represents Purpose times Energy, times small, simple steps. He emphasized that the key to achieving success is taking small simple steps consistently. I would like to have Jim and Danielle as a guest on Mindfulness Mode. So

I’ve chosen only four specific speakers to talk about in this episode. The whole event was terrific and if you ever have a chance to attend an Archangel event, I think you’d enjoy it. Here is a list of the other speakers:  but  So

Dr. Shefali Tsabary – is the author of A Radical Awakening, a TEDx speaker, and a clinical psychologist whose work has connected Western psychology and Eastern philosophy to bring a new understanding to the world. but    So Archangel Changemaker

Emily Fletcher – Founder of Ziva Meditation and best-selling author of Stress Less, Accomplish More. She is a leading expert on meditation for high performance. This amazing woman was identified as one of the top 100 women in wellness to watch. but

Kashif Khan – The CEO and Founder of The DNA Company, who improves lives around the world through unique insights into the human genome.  but  So

Dr. Stephanie Estima – Best-selling author of The Betty Body, host of the BETTER! With Dr. Stephanie's podcast, health optimization coach. but  So

John Stix: The co-founder of Fibernetics, Canada's fifth-largest telecommunication company, and a transformational specialist who helps you discover your “who”. but  So

Naveen Jain – Billionaire, best-selling author, founder of Viome, and multiple award-winning entrepreneur and philanthropist who is focused on audacious ideas that push humanity forward. but    So

Nicholas Kusmich – He helps businesses rapidly scale revenue by getting more clients. Nicholas is responsible for the highest campaign ROI in the world according to some. but    So

Alexandra Cattoni – Founder of The Copy Posse, and one of the most influential women in marketing today. Alexandra is a driving force behind many multi-million dollar launches. but

Chandler Bolt – CEO of SelfPublishing.com, a Forbes 30 Under 30 honoree, and the author of 7 bestselling books including his most recent book titled “Published.” but  So

Simon Bowen – Founder of The Models Method and creator of The Genius Model. Simon is an author and performance improvement coach, whose team is responsible for hundreds of millions of dollars in direct sales across multiple industries. but    So

Tricia Brouk – An internationally award-winning director, author, producer, and founder of The Big Talk Academy.but  but    So

Kasim Aslam – Founder and CEO of Solutions 8, one of the world's top-ranked Google ad agencies. but    So Archangel Changemaker

Steve Lowell – Master coach to high-impact speakers, and president of the Global Speakers Federation. Steve helps Changemakers with a message to monetize through the spoken word. but  So  but but