C von Hassett and Rachel Reid Wilkie are, as they say, co-conspirators in all things – with a 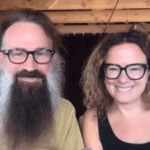 heavy emphasis on spirit – which together they’ve been exploring since the day they met. Throughout the years they have collaborated on numerous projects in the Arts, both in Los Angeles and New York City. Their time in the East Village culminated in a monumental exhibition, Documents of Love, at the famed Hosfelt Gallery in Chelsea, where the couple exhibited a diverse body of work – poetry, paintings photography, a short film – to the attendance of thousands. Upon returning to Los Angeles, C von & Rachel founded Riot Material magazine, a now thriving and widely read literary-cultural magazine with its eye on Art, Word, and forward-aiming thought.

Rachel and C are the rare married couple who not only work and create together but practice together day after day, side by side, often knee to knee, in the singular pursuit of knowing the deeper self beyond the conceptual self – that timeless, eternal Being which births forth the temporal one. To that end, the Pandemic Years saw the couple in contemplative retreat at their high-desert ranch in the Northern Mojave, a sacred landscape that sits just below the 12,000-foot peaks of the Eastern Sierra Nevadas. Here, beyond their full immersion into meditative practice, C von wrote Entering the Mind, while Rachel delivered to the world her inaugural spoken-song album, titled XI.